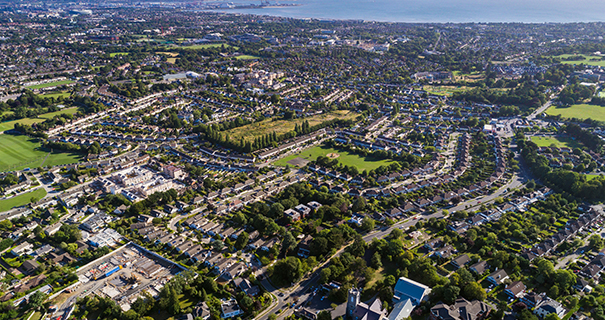 Rising cost of living issues failed to dampen Irish property prices, which were 15.2 per cent higher in March than a year earlier.


Rising cost-of-living issues failed to dampen Irish property prices, which hit a seven-year high in March, with prices 15.2 per cent higher than a year earlier. That was fractionally ahead of the February rate of 15.1 per cent, a figure that was revised down from an originally announced 15.3 per cent.

Properties outside Dublin saw the most dramatic increase, with house prices 17.3 per cent up on the year and apartments costing 17.6 per cent more, according to the Central Statistics Office’s residential property price index.
The Border region featured the fastest growth, with properties costing 25.1 per cent more than in March 2021.
The Mid-East region saw the lowest increase outside the capital, at 15.2 per cent. Dublin house prices were up by 17.3 per cent and apartment prices up by 17.6 per cent. The region outside of Dublin that saw the largest rise in house prices was the Border at 25.1 per cent, while at the other end of the scale, the Mid-East saw a 15.2 per cent rise. Prices for houses in Dublin rose by a more modest 12.6 per cent, with apartment prices jumping by 12.9 per cent. The biggest increase in the capital with in the Dublin city area, where prices were 13.8 per cent ahead of March 2021. South Dublin had the lowest rate of increase at 11.3 per cent.

New homes
However, prices of new homes are rising at a far lower pace – up 6.2 per cent on an annualised basis in the first quarter of the year compared with a 17.8 per cent rate of house price inflation for existing properties. But the rate of inflation in new home prices is still growing, up from 5.3 per cent in the fourth quarter of last year.

And KBC economist Austin Hughes noted the median price of new homes in March, at €348,500, remains 26 per cent higher than the median price of €275,000 for the purchase of previously owned properties. Activity in the housing market was up over 9 per cent in March, with 3,918 homes sold, according to Revenue figures. But that is down 0.8 per cent on the number of transactions in March last year. The upward pressure on prices remained “substantial”, Mr Hughes said, but he added that there were tentative signs that the “heat” in the market may be easing. The 0.6 per cent monthly rise in prices was, he said, the smallest in a year and, even allowing for seasonal factors, it is still the slowest since last summer. He also noted the slight drop in transactions compared to the same month last year.

Mortgage loans
Given that the mortgage loans are rising at a much slower pace than prices, Mr Hughes said it suggested Central Bank macroprudential rules “act as an anchoring influence on mortgage lending and, eventually, when the pandemic-related boost to house purchase deposits fades, this should prompt an easing in house price inflation”.

New homes accounted for 630 of the properties bought in March, up 16 per cent on March of last year.Prices are now just 2.1 per cent lower than their 2007 peak, although, in Dublin, they are still 10.1 per cent off that peak. They have surged by 118 per cent from their post-financial crash low in early 2013.

Trevor Grant, the chairman of the Association of Irish Mortgage Advisers, said it was hard to predict what impact the oncoming ECB rate increases would have on Irish house prices later this year and into 2023, given the existing housing shortage and strong mortgage approval figures.

“While the growth in property prices remains strong, we would expect this to slow as the year progresses. This is due to the anticipated increased supply coming on stream and mortgage exceptions becoming harder to obtain, which reduces borrowing power accordingly,” he said.